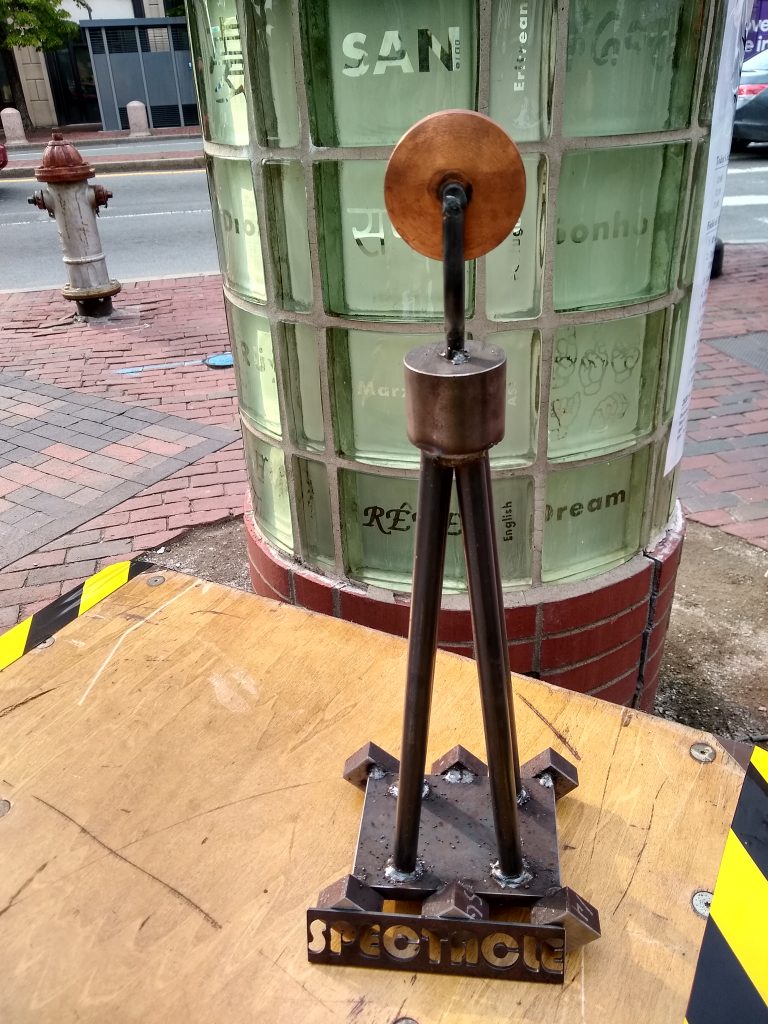 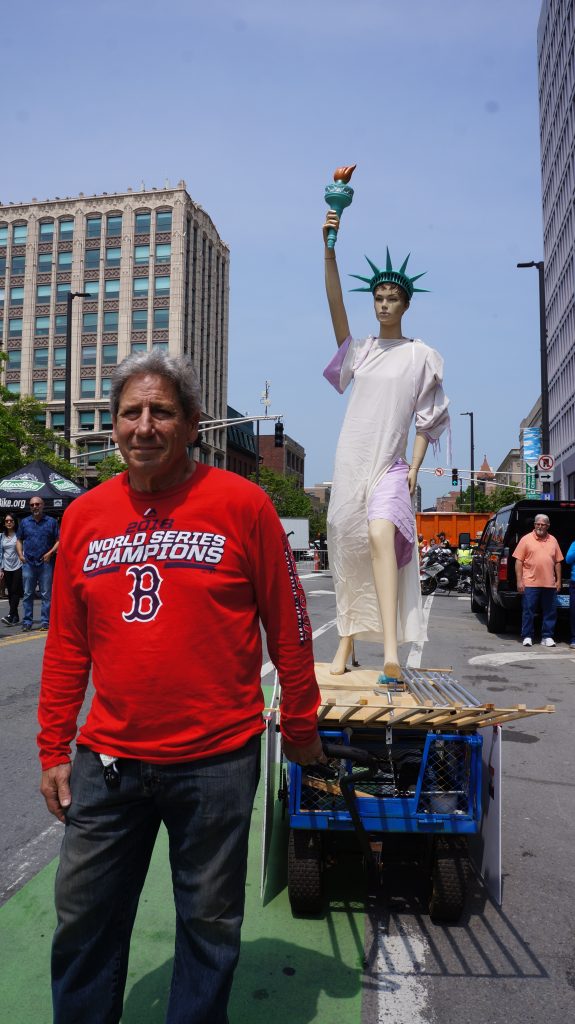 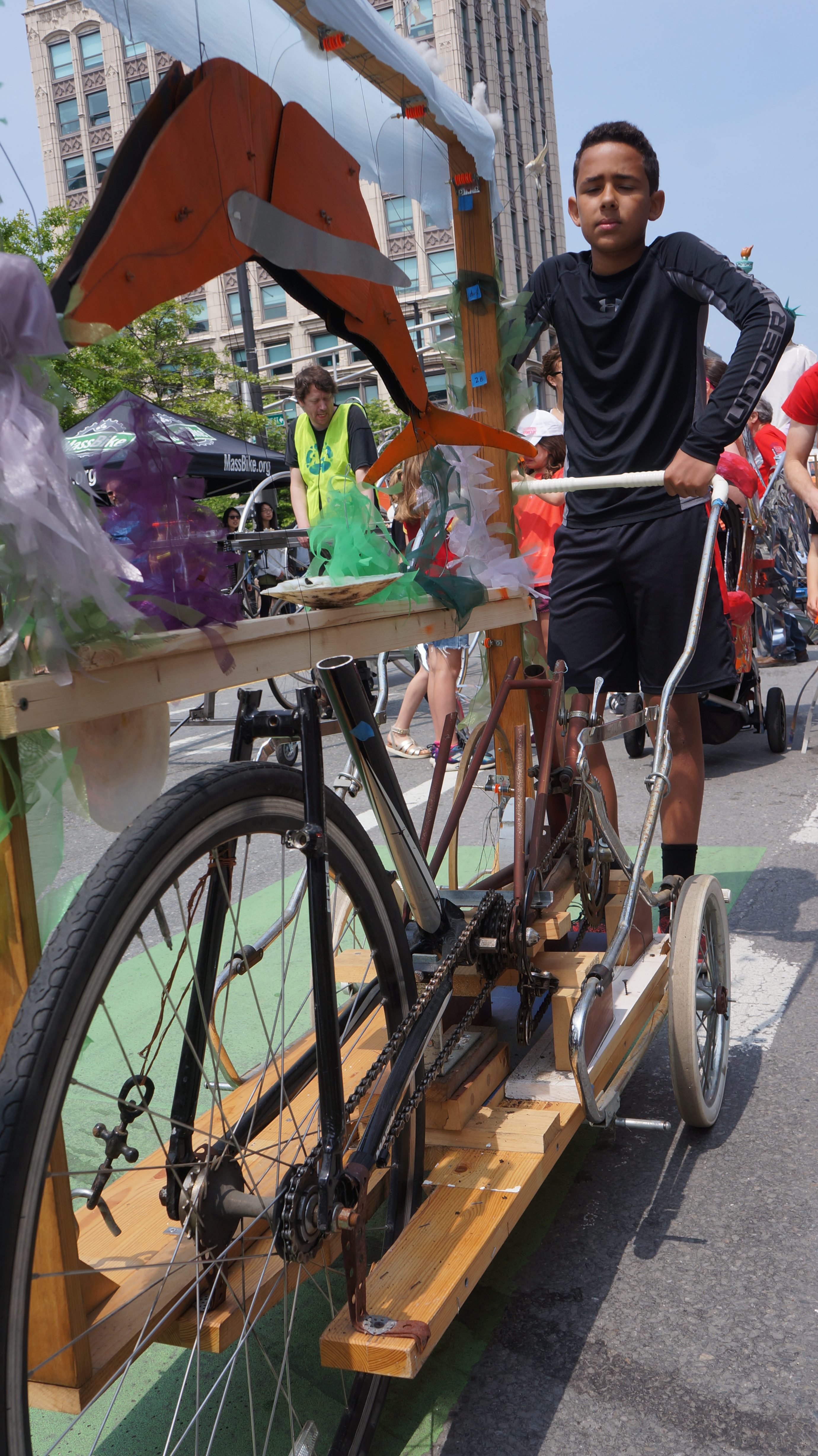 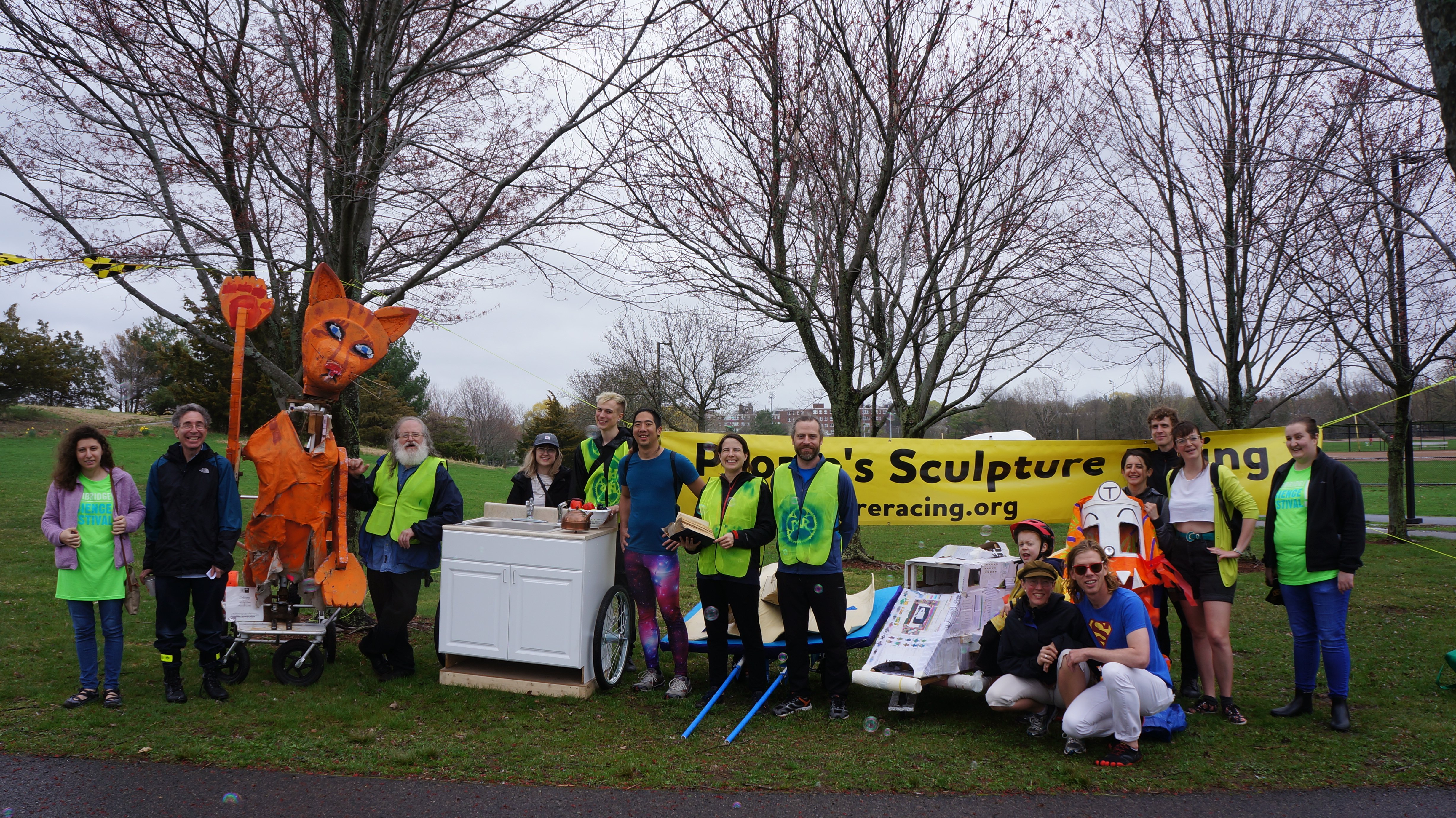 Rain or shine, but the post-race exhibition may be canceled

This is a Cambridge Science Festival Event, a 4/10 mile race of wheeled arts and crafts on the loopy sidewalks around the Olympic soccer field at Danehy Park in northwest Cambridge (near Alewife), followed by an exhibition of works until 2 PM. The race is followed by an exhibition of works lasting until 2 PM. There will be an artist/engineer design table at the exhibition where fans of all ages can contribute a conceptual design for a racing sculpture.

Here’s a link to more information about entering. Racecourse at Danehy Park. Green marker in the earthview view above is the location of starting (and ending) line. The exhibition area in on the hill to immediately to the northwest of the marker (on the course).

Where is Danehy Park? Danehy Park is at the top left. It is an easy lope from Alewife T Station (16 minutes). We suggest parking in the Field Street lot to the S.W. of the park. (Parking is available from New Street to the west of the park, but that lot fills up fast on Saturdays.) Fresh Pond Mall’s parking lot is also close. (The green marker in the map view above doesn’t mean anything.) 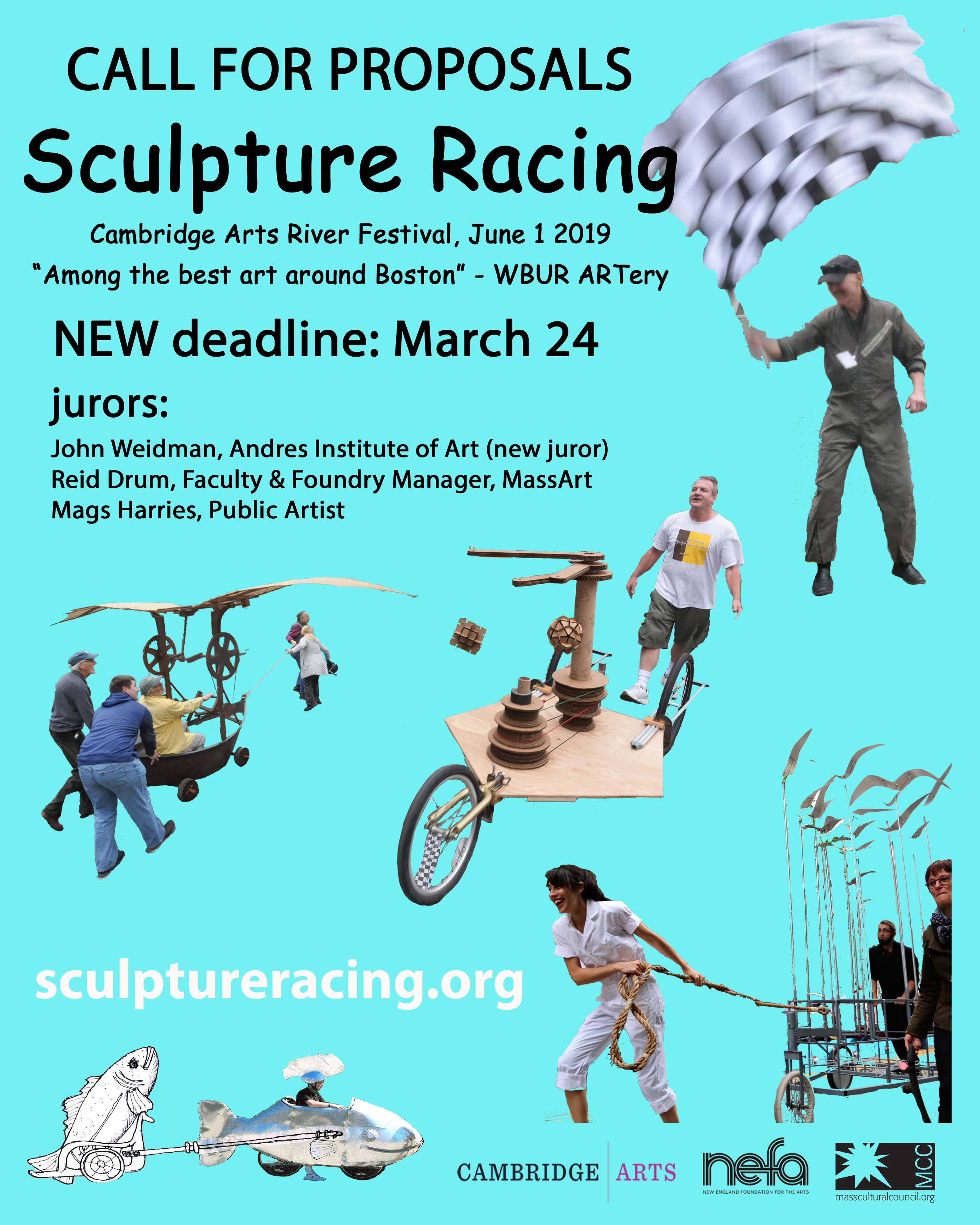 This is a ¾ mile juried race of pushed, pulled, or pedaled sculpture with a following daylong exhibition at the Cambridge Arts River Festival. The festival is an annual celebration with 150,000–200,000 festival-goers. Participants have the opportunity to join in a spectacular, well-attended event, and exhibit their work publicly on Race Day and on the PSR site, and become part of the sculpture racing community.

The Exhibition site will be at Carl F. Barron Plaza in Central Square, and the racecourse will run for most of its length along Massachusetts Ave.

Email proposals, title, images of proposed and past work, short bio, contact info by March 24 to  sculptureracing@gmail.com. Jurying takes place early the following week. The three jurors–Reid Drum, kinetic artist in the 3D Department at Mass Art and two other jurors TBA–will judge work on the basis of quality, originality, fidelity to guidelines, practicality, & entrants’ demonstrated capacity to complete the project.  Notifications within a week. Works need not be completed until RACEDAY.

John Weidman is one of the original members of the World Sculpture Racing Society, a working sculptor, and the co-founder and director of the Andres Institute of Art and Sculpture Garden in Brookline, NH. The sculpture garden, which magically covers a small mountain, is the largest in New England. John’s website.

Water Sports (1980s). John has created and raced metal and stone sculptures, including possibly the heaviest piece ever raced. Some of the best works finish last! (G. Koetsch image)

Mags Harries was a juror in the inaugural 2015 race. Here she is (leftmost) with Laura Knott and Nick Capasso reviewing entries.

Mags Harries’ public art projects have received national recognition and won many awards. Her early projects Asaroton and Glove Cycle have become icons of the Boston area. Many of her temporary projects involve community participation and social action, including: Winding Down the Charles, Speed of Light, and One Legged Table. She is an active member of the Boston Sculpture Gallery and teaches at the School of the Museum of Fine Arts. Mags was a juror for our premiere River Festival race in June 2015 Mags’ website.

Reid Drum is a faculty member of MassArt, and runs its industrial-scale, 11,000 s.f. foundry. He is a kinetic artist, and teaches classes in kinetic art, the design and construction of metal sculpture, and general 3D art.

Rock Louis combines footage of the Community Race at Danehy Park and The People’s Sculpture Race at the Cambridge Arts River Festival (7:37 minutes)

Give yourself plenty of time to orient yourself and make your way to the Sculpture Garden and Cambridge Parkway.

The Sculpture Garden and the Start and Finish lines are at the top (north) of  Cambridge Parkway.  There’s no parking there. The Sculpture Garden. This above map is upside-down (east is to the left!) Walk to the Sculpture Garden along Lechmere Canal, which runs east from Cambridgeside Galleria (the above map is also upside-down; east is to the left!) 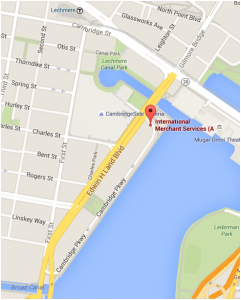 Cambridge Parkway runs along the Charles River near the Science Center. (This map is correct.) And where is all that? (Red marker is right next to start/finish line.)

How do you get there?

Walk easterly from the Cambridgeside Galleria past the fountain, along the Lechmere Canal, under Land Boulevard, towards the Charles River.

If you’re dropping someone off, drive in a northerly direction along Land Boulevard (the wide orange road on the map), and pull over just before or after Cambridge Parkway, which runs east/to the right off Land Boulevard (you can use “International Merchant Services” on your GPS).

We look forward to seeing you!

Raquel Fornasaro, Christian Herold, and Rock Louis displayed the glories of sculpture racing as keynote speakers and film maker for the Kennedy School’s STEAM Week Kickoff. Raquel showed off Rocket Express 2.0 which her kids (now 7 and 9) helped design. Christian showed slides demonstrating design process stages–from concept, schematic, and prototype, to real-world race. The talk concluded with Rock’s Rockdreams Productions 7-minute video combining footage from the River Festival Race and the Community Race. Rock custom made the video for the Kickoff. The event was started off by Lindsey Tosches, STEAM Teacher and Makerspace Coordinator, Principal Mark Hurrie, and youth outlining upcoming STEAM Week events. The whole school watched, including 450 kids seated in the gym-auditorium in neat rows by grade and classroom. Images by Raquel. 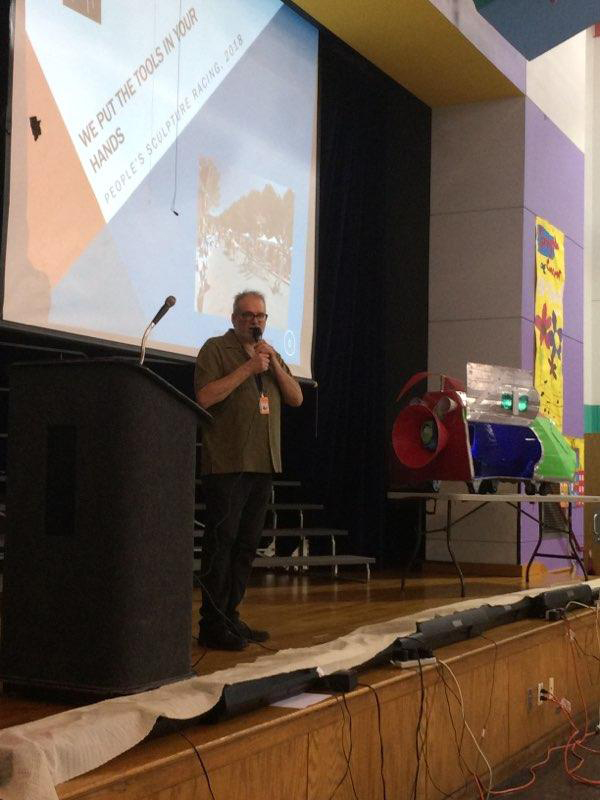 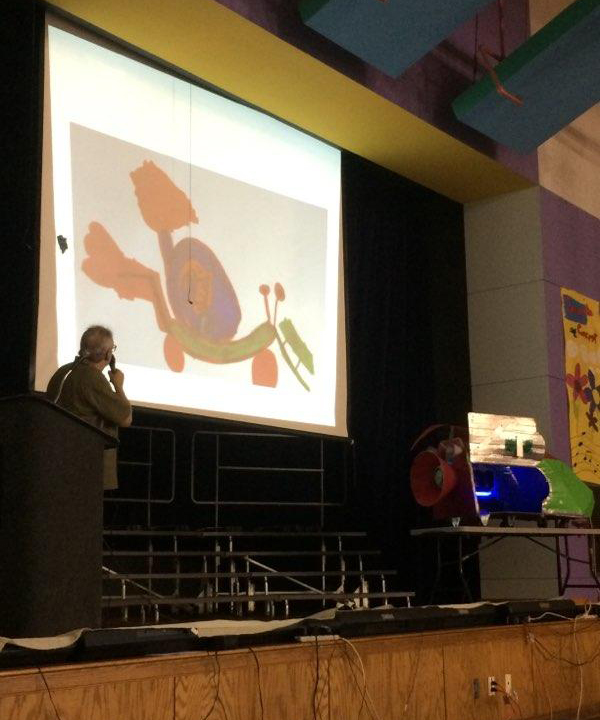 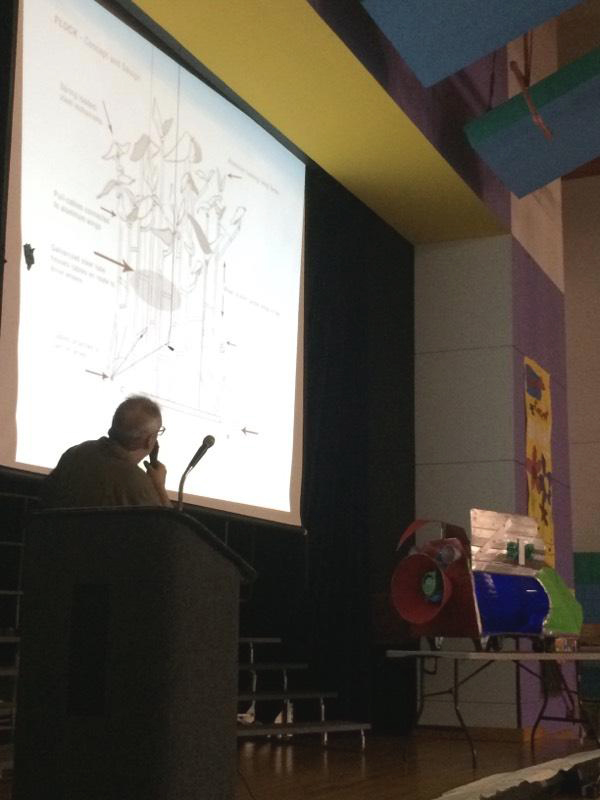 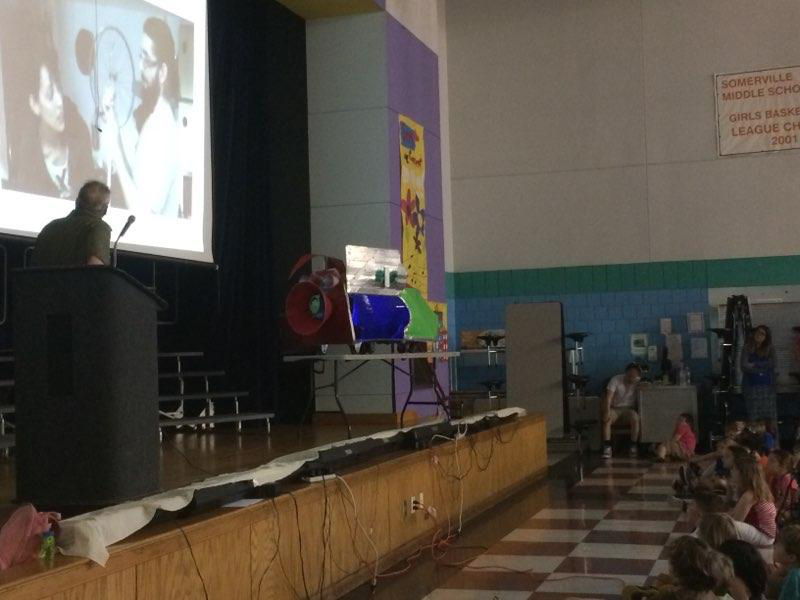 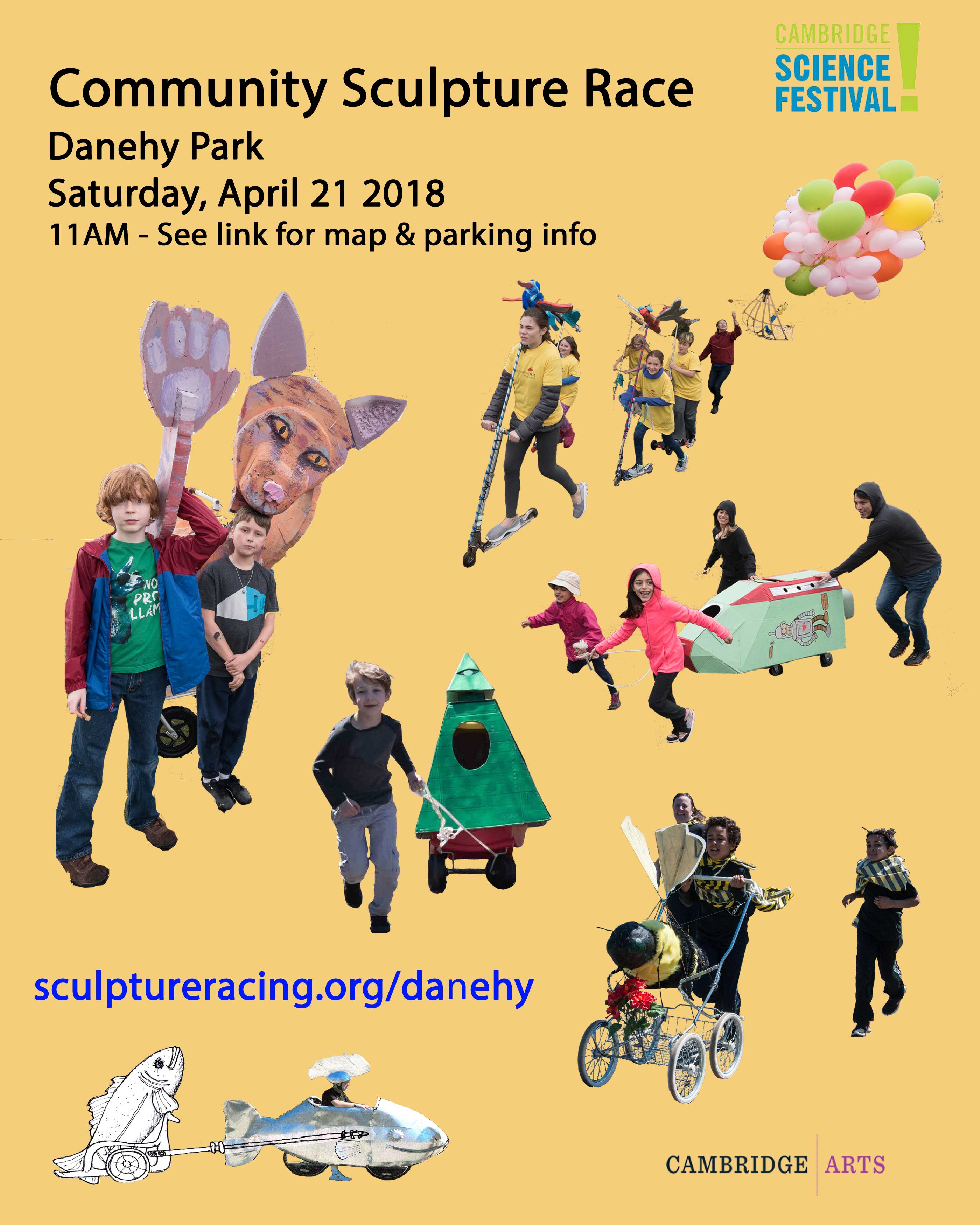