“What we want to do is create an art form that has a mass appeal that has the context of a popular art form, a popular thing like a race, but also works at on high level that is the pieces could be shown in an art gallery or a museum as well” — WSRS Co-Founder Geoffrey Koetsch, News 4 Video, Milwaukee, 1987 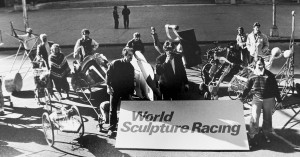 People’s Sculpture Racing was directly inspired by the World Sculpture Racing Society, which ran races during the Cambridge River Festival and in other national and international locales in the 1980s.

Please see more about the WSRS artists below the WSRS’s First Manifesto, including examples of their racing sculptures and suggestions for designers. Photos in these tribute pages are by Geoffrey Koetsch and used with his permission.

SCULPTURE RACING is kinetic art in which both artwork and mover are perceived as one; sculpture races are dynamic groupings of art objects and personalities

SCULPTURE RACING exists in the zone between high art and mass culture; it is moveable art that may appear anywhere, not necessarily where one expects it

SCULPTURE RACING blends art with the ambience of the popular festival, making it more accessible to the general public

SCULPTURE RACING brings artists out of the isolation of the studio and into public: it brings the public into contact with artist-as-personalities in an atmosphere that is relaxed and open, allowing an easy give-and-take

SCULPTURE RACING embraces the competitiveness of the modern art world that compels artists to throw themselves into promotion, mass marketing and popular appeals

SCULPTURE RACING is the focus of a protest against the new political conservatism with its accompanying cuts in social programs and funding for the arts, the results of which have engaged artists in all media in a desperate race for survival

SCULPTURE RACING is an art of social-aesthetic dialectics:

Ultimately the “Art of Sculpture Racing” per se will not reside in individual art objects—not even in individual sculpture races—but rather….

“SCULPTURE RACING is kinetic art in which both artwork and mover are perceived as one; sculpture races are dynamic groupings of art objects and personalities”– Geoffrey Koetsch, from The First Manifesto of Sculpture Racing

Geoff, an interdisciplinary artist, is a professor of art at the Lesley University School of Art and Design. He is the Founder and Director of The Arts Collaborative Inc., serves on the advisory board of People’s Sculpture Racing and the Institute of Contemporary Art in Santa Cruz, and is a recent director and board member of Contemporary Arts International.

Geoff curates with his Lesley colleague Ellen Schön, and was a producer/curator of the First Biennial Festival of Sound Art and Performance Art at The Quarry in Acton in 2013.

He performed a multimedia piece “Rub a Dub Dub” at Mobius Artists Space in 2014, and “The Preparation,” at Sculpture Walk, Old Frog Pond Farm in Harvard, MA in 2013. Along with the World Sculpture Racing Society project, in the 1980s Geoff produced the N.E. Artists Books Symposium, was program director of Metropolitan Artists and Poets, and co-founded and directed the Theater of Kinetic Sculpture.

His many professional fine art shows are enumerated along with marvelous images on his website. 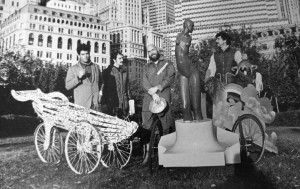 Some of Geoff’s Racing Sculpture 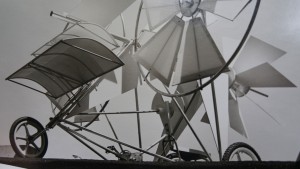 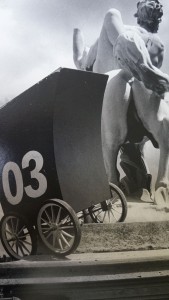 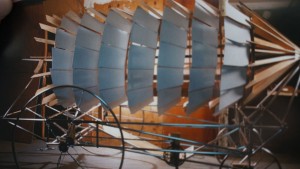 “Yes, the piece needed to be pushed or pulled.   I feel that this requirement led to a wide range of pieces that were pretty abstract in nature: what immediately comes to mind was the first welded steel construction of John Weidman [Water Sports] – a large very heavy steel abstract form which was pushed by his whole family.   It was a piece of art that one would expect to find in a gallery, not on the street.  There was nothing “vehicle” about it… actually it was a sort of anti-vehicle which made it all the more appropriate.   It was so big and heavy and so hard to move that he always came across the finished line last.   For me, that made it conceptually perfect.

“There was never subjective judgment – it was always win, place and show based on the order of crossing the finished line.  (I don’t remember any other awards ever as part of the original events.)  This also set the event apart from any other ‘art’ show.  For me it was a perfect statement about winning and losing in the context of subjectivity- which seems to always come down to the personal taste of the ‘juror’.  So often jurors and critics forget that it’s all made up, and that their truth is not a universal truth.” 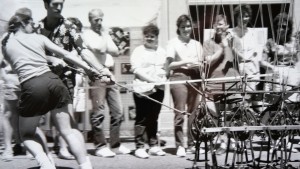 Designers take note!  Try to match this with an original work that doesn’t run on wheels – Herold 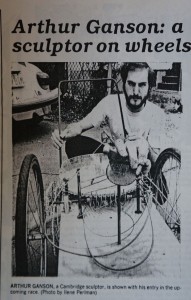 “This machine was a response to a call by the World Sculpture Racing Society in Boston to make sculpture that would be exhibited on the street and in the context of a road race where the ‘best’ work would be determined by race rules (win, place, and show) and not subjectivity. The cast hand is my own and the pen, controlled by three cams (x, y and z axis), moves in three dimensions and writes the word “faster!” on an index card while being pushed down the street. The faster the cart is pushed, the faster it writes. Warning, an out of control feedback loop between creator and creation can result in dangerously fast speeds and certain death.” “The wheels should be integral to the work, not merely tacked on to an existing sculpture. The original manifesto stated that one of the aims was to free artists from arbitrary judgments and give them the clear cut winner status sports figures enjoy, therefore crossing the finish line first was all that mattered.” 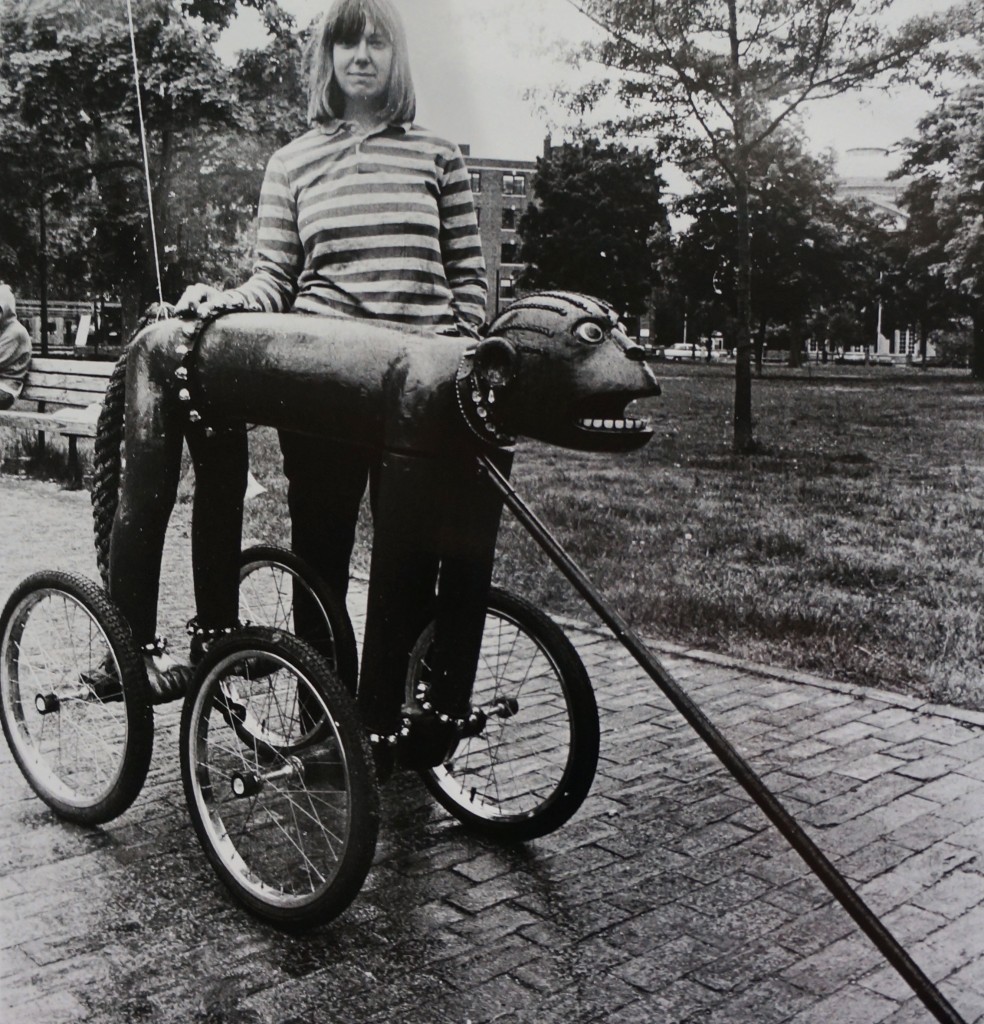 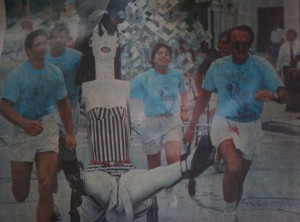 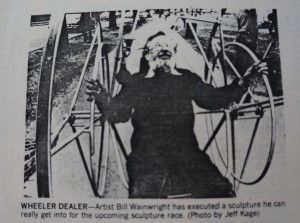 Bill worked with Buckminster Fuller at MIT, studying and then designing geodesic domes, and taught architecture at Harvard, until he quit, grew a beard, and became an artist, producing public art works throughout the U.S. and in Canada. 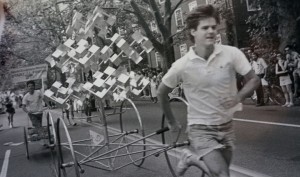 He contributed to public art in Cambridge with two well-known works. His “Lights at the End of the Tunnel” mobile for many years animated the Porter Square T Station, while his kinetic “Never Green Tree” sculpture still scintillates near the Cambridgeside Galleria. 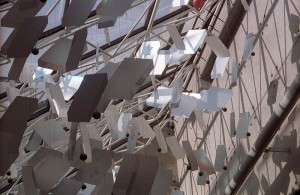 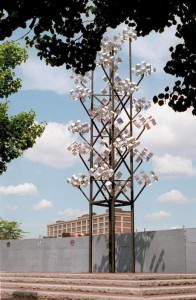 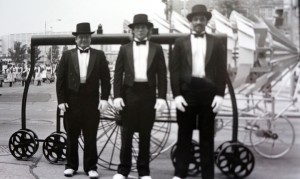 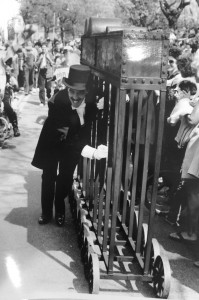 I enjoy things on wheels because they speak of the American life.
– George Greenamyer 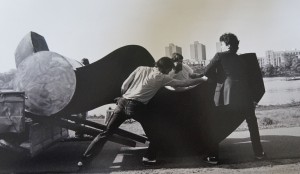 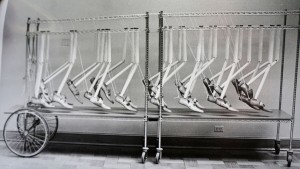 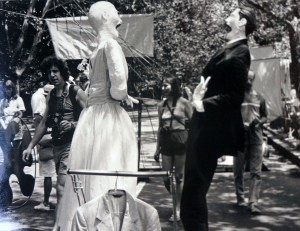 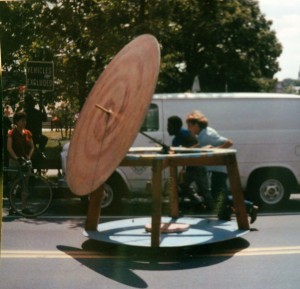 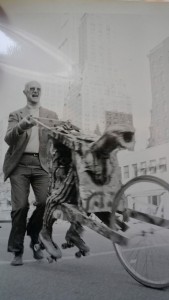 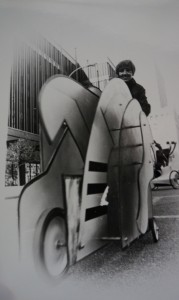 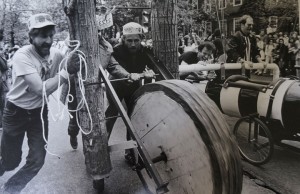