Just how did those square wheels work!!? Click to watch.

This is the Harvard Physics Team’s Sisyphus sculpture captured in an app on Christian’s smartphone. The HPT’s leader, artist Kim Bernard, sends us a link to a blog on the building of Sisyphus.

Here’s a great story by Greg Cook. See the new “Press” section for more. Lots of photos and videos to come.

The Revival Of Sculpture Racing In Cambridge

Lining up for the start of the race. (Greg Cook)Written By Greg Cook
Published June 6, 2015
LINK

When Christian Herold moved back to Cambridge in 2007 after many years in New York, he recalled, “I asked where is Sculpture Racing and everyone shrugged their shoulders.”

World Sculpture Racing, as it was known, was a series of races held annually from 1982 to ’85 during the Cambridge River Festival. “Part street-theater, part performance art, part sporting event,” local sculptor Pat Keck, one of the key artists involved, once described it.

“I saw at least one of them,” Herold said, “and it was one of the most miraculous things I’ve ever seen. It seemed like there were hippies running along frantically with the most fantastic contraptions.”

“What we want to do is create an art form that has a mass appeal that has the context of a popular art form, a popular thing like a race, but also works on a high level, that is the pieces could be shown in an art gallery or a museum as well,” Geoffrey Koetsch, who co-founded the shenanigans with Kirby Scudder, said back when they held a sculpture race in Wisconsin in 1987.

So Herold set about reviving it. His background is in performance art. Perhaps his most prominent project, he says, was being one of the lead organizers of “Ring Out,” which invited thousands of people to surround the World Trade Center site in New York during the 2004 Republican Convention and ring bells for peace.

Here, one thing lead to another and Jason Weeks, executive director of the Cambridge Arts Council, got him in touch with Koetsch.

“Geoff was a little doubtful at first,” Herold said. “They had structured it as a conceptual thing with a lot of values about the role of artists, happenings, Fluxus. He wanted to make sure if he handed the torch to me it would be a serious artistic endeavor. … He’s become a complete supporter.”

“The whole idea was trying to maintain the quality of the art. You want to have really imaginative pieces out there and you want it to be fun,” Koetsch said after today’s race. “So you’re trying to stay in two camps—high art and kitsch.”

Back in the day, Koetsch and Scudder curated the entries from established artists, Herold said. This time around he called it “People’s Sculpture Racing” and had an open call for entries as well as offering youth building workshops.

Some 16 sculptures arrived for today’s madcap, 3/4-mile race at the Cambridge River Fest—a 23-foot-long fish, a giant rat trap, a caterpillar-bike, a giant sculpture of a belt-sander, a papier-mâché donkey. Then they were off—the first sculpture racing here in 30 years. Leaving the south corner of University Park Commons, they ran southwest along Sidney Street, turned left onto Meriam, then northeast along Purington, left onto Cross Street, a jog across Landsdowne Street, to Franklin Street and the finish back at the park.

“I think we were in the lead and then we took a wrong turn,” said Adria Katz of the Somerville-based “Everything Muffin Collective,” which took second in their caterpillar-bike.

“Oh, God, it was so frustrating,” Cambridge sculptor Mitch Ryerson said. “We were first for most of the course. Then in the last block, the bicycle-caterpillar passed us. It was neck and neck. The police escort disappeared. It was just the two of us. Then we came to a street that was closed. We turned left.” And, well, they got lost. “We had to double back. We did an extra three or four blocks and we came in third.”

“Oh my God, it was exhilarating coming towards the finish line,” James Herold said of coming in first in “Wheel #2.” “It was a hard race. We were practically neck and neck with a couple people for a while. Then they took a wrong turn and we didn’t. My arms are sore, but I’m just living off the adrenaline right now.”

“We were third to last. So we were victorious in not being last,” said artist Be Be (who is sometimes also known as Brenda Be) of the American Family Happily Institute, who resides south of Boston. “Also our goal was to spread happily and so we have succeeded in spreading happily. … Whenever you spread happily, you win.” 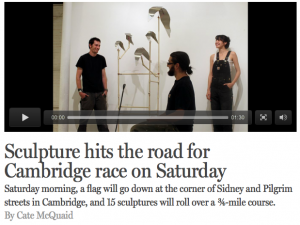 Missed the Grand Circumambulation at the MIT Museum on April 16?

Watch PSR-Team Member Rock Louis’s video about the building of “Flock,” a racing sculpture by members of Artist Operation–T.T. and Dennis Svoronos and Rory Beerits (all People’s Sculpture Racing team members.) The completed version  (the video includes images of a PVC prototype) will race on June 6. The video is shot at AO’s studio at The Distillery artist community in South Boston.